What are green chemistry and its applications?

The issue of the environment is an important issue that should be considered by all artisans, consumers and all sections of society, neglect of environmental health directly affects the quality of life of ourselves and our children. The type of processes and materials used in the chemical industry is closely related to the environment.

What are the green chemicals?

In general, green chemistry chemicals are those products that are produced by modified processes in terms of pollution and have the least negative impact on plant and animal health and the ecosystem in general.

For green chemistry in general, twelve principles have been defined and written that clearly state the policy, direction, and goals of this topic, we will discuss them below:

The second principle is to increase the use of atoms. This section generally focuses on increasing the efficiency of chemical processes and tries to provide high-efficiency reactions by focusing on the use of low-risk chemicals.

This principle minimizes the use of reactants and solvents that are likely to explode, ignite, and have adverse reactions. 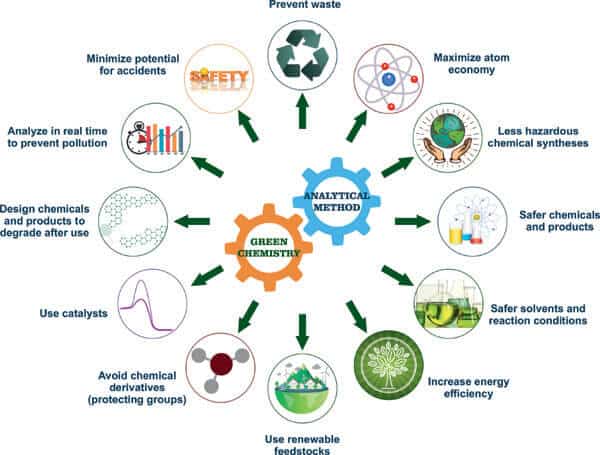 The third principle is the synthesis of chemicals with the least risk, this method tries to minimize the use of these substances by modifying methods and processes that are dangerous to human health and the planet.

The fourth principle, which is the step developed by the third principle, states that the processes of production of chemicals produced, in addition to not being harmful and toxic, but should also help increase human health and the environment.

The widespread use of agrochemicals is related to this principle

The fifth principle tries to minimize the use of solvents and other auxiliaries in chemical processes in general.

The sixth principle states that the use of energies that are harmful to the environment must be minimized. The processes must be designed so that the pressure and temperature of the environment are used.

The seventh principle is the principle of expanding the use of renewable energy sources.

In the eighth principle, the production of by-products and derivatives is used less or unused.

Principle 9 refers to process catalysts and states that it is better to use catalysts to repeat the reaction can greatly reduce the negative impact of the reaction on the environment.

Principle 10 states that a chemical product must be designed to avoid environmental pollution and eventually become a product that is linear to the planet.

Principle 11 states that measures must be taken to provide immediate control over the production of pollutants and to stop or eliminate them as soon as possible.

Finally, the topic of safe chemistry and the development of reusable and renewable products is discussed.

Today, due to the spread of pollution and dispersion on a global scale, green chemistry has become an international topic. Rising petrochemical prices, non-pollution, biocompatibility, cheaper costs, and greater competitiveness in the global economy are all factors that have led developed countries to pursue the use of green chemistry.

The results of the study of current trends in chemistry based on articles and patents indicate that the future of chemistry will originate from the methods and view of green chemistry.

Green chemistry must be fully supported not only by the scientific community but also at a higher level by governments, industry, and other sectors of society.

The efforts of researchers in green chemistry should be to solve fundamental and serious problems related to climate and environmental pollution, energy, health, agriculture, and ultimately increase public welfare.

We hope that the next generation of chemists in the 21st century will put this idea into practice.