Thermoresponsive polymers have special properties that have led to a wide range of applications for them. These smart polymers can show different properties in response to limited changes in temperature, which has led to industry Diversity, including medicine, and in the discussion of drug delivery and tissue engineering, much attention should be paid to them. Temperature-sensitive polymers are a type of smart polymer that has attracted the attention of many researchers and scientists in various fields. thermoresponsive polymers have a small hydrophobic-hydrophilic balance in their structure and a small temperature change can cause a new change in the hydrophobic and hydrophilic interactions between the polymer chains and the aqueous system. These polymers can show phase change in a certain temperature range, for example, their solubility in a certain solution will be different in the temperature range.

What are Temperature-Responsive Polymers Used For?

Researchers around the world are constantly studying systems based on efficient stimulus-responsive polymers to translate the effect of a stimulus into a response. These intelligent polymers have the ability to translate changes such as physical and chemical changes that occur in their environment. This feature allows these polymers to be used in many cases. Numerous papers have described polymers that respond to temperature, pH, and ionic strength. In this paper, the application of these materials in biosensors and analytical applications is investigated. Among these materials are polymers that respond to several stimuli. As a result, such materials have found many applications, including in medicine, energy, and the environment. With the good adaptability of these materials to different applications, we can expect a bright future for the use of smart polymers.

The following is a list of some of the consumables for Thermoresponsive polymers:

What is the Thermoresponsive Hydrogel?

Polymers that are capable of absorbing a lot of water at about 90% of their weight are generally called hydrogels. Unlike conventional hydrogels, hydrogels that are formed in situ by a temperature stimulus are physiologically possible to use as a biomaterial. These types of hydrogels can have different solubility in different environmental systems and play an important role in the release of drugs and drug delivery discussion. The use of such materials facilitates the development of pharmaceutical formulations by mixing a polymer solution and a drug and can be used to improve the dissolution of low molecular weight hydrophobic drugs. 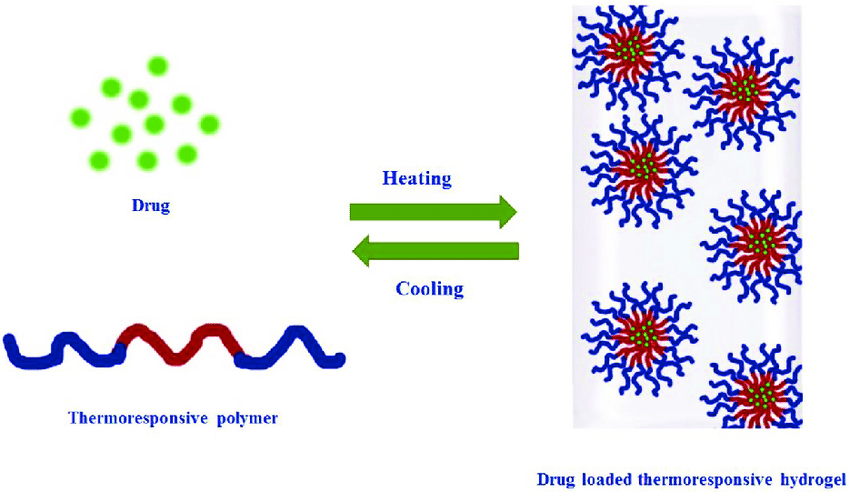 Due to the ease of formulation of pharmaceutical products by performing a simple process of mixing drug (s) with these substances, biocompatibility and the possibility of many applications can be used in medical and pharmaceutical fields with the aim of tissue engineering, dissolution of insoluble drugs and controlled release of drugs and large molecules.