Bitumen is a composite material that has been known by mankind and has been used in the construction of decorative and construction materials, artificial prosthetics, waterproofing, and even mummification.

It is naturally occurring from the earth’s crust as fountains, lakes, and superficial mines in solid and liquid forms. It was natural bitumen used in the past by human ancestors and used in road construction in the late nineteenth century, and finally, by discovering oil and refining it, and creating this product waste, the path to its wide use of it in road construction opened.

It is obtained by the aeration process on vacuum baton (the primary material of bitumen production, which is taken from the residue of the distillation tower in a vacuum oil refinery) is obtained in bituminous units and its degree of permeability (determination of bituminous hardness) It is between 60 and 70.

Asphalt pavements made with this product today provide a very smooth and safe way for light and heavy vehicles and high-quality landing bands for boarding and take-off planes, and even excellent rail trains.

Structural moisture insulators and industrial applications such as protective coatings for oil and gas pipelines and power transmission lines all indicate that coatings are waterproof and waterproof.

According to 2007 statistics, currently, around 110 million tons of this product worldwide and 4.3 million tons of it are produced in our country, which will increase by 4 percent if the refineries increase their capacity.

Chemistry and chemical engineering in our country have developed a lot today so that in each university one or both of them or even different trends can be considered. shanghai Chemex company is one of the best suppliers of chemicals in the world.

Oil bitumen is solid and semi-solid, which is directly derived from the distillation of crude oil or with additional operations such as blowing air. It is a residual or heavy residue of the distillation of crude oil. The amount of its crude oil varies from zero to more than half of that. Also, these products from different sources can be very different. Therefore, refineries should carefully select their crude oil to ensure its quality.

The important application of bitumen 60/70 is due to the two important properties of this material, its impervious to water and high adhesion due to these properties, the main use of bitumen in road construction and insulation.

The Most Important Products of Oil Bitumen 60/70:

It is produced in two types anion and cation. Technically, the cationic emulsions became popular from 1951 onwards, and according to their characteristics, they quickly replaced the anionic emulsions. Water and bitumen are not mixed, but the emulsion of this product technology makes this process possible so that a significant percentage of it is dispersed in the continuous phase of water. The compound, called the emulsion, keeps powders of particles in the continuous phase of suspended and stable water in the form of charged (electrically charged) it.

In this mixture, this product (which alone and only industrial bitumen is 50-40, 70-60, or 100-85) is not soluble in water, but it is floated in the form of very small microbial cells in the water. In some cases, it can also be used in conjunction with emulsifiers, a stabilizing agent. These emulsions are mainly liquid-based in the liquid, which is dispersed in the water phase. In these types of these emulsions, the amount of bitumen depends on its application, which varies from a minimum of 52% to a maximum of 69%.

The solubility of this liquid is obtained from the solubility of it in solvents or petroleum oils. The type and quality of soluble depend on the quality of it, the solvent type, and the amount of solvent. Whatever the amount of petroleum solvents in this solution is higher, it is more fluid. The lack of access to bitumen heaters, the decomposition of it at high temperatures, the cooling of it at work, the inability to penetrate porous minerals, the safety of workers, the fire, and time, make it possible to use soluble it in some cases. In-cartel solutions are used for surface finishes, intrusive, surface asphalt, industrial cold asphalt, or mixtures in place. Bitumen (MC) is made from the solubilization of pure asphaltenes in white oil, the number of which indicates the viscosity of bitumen in terms of centistokes. 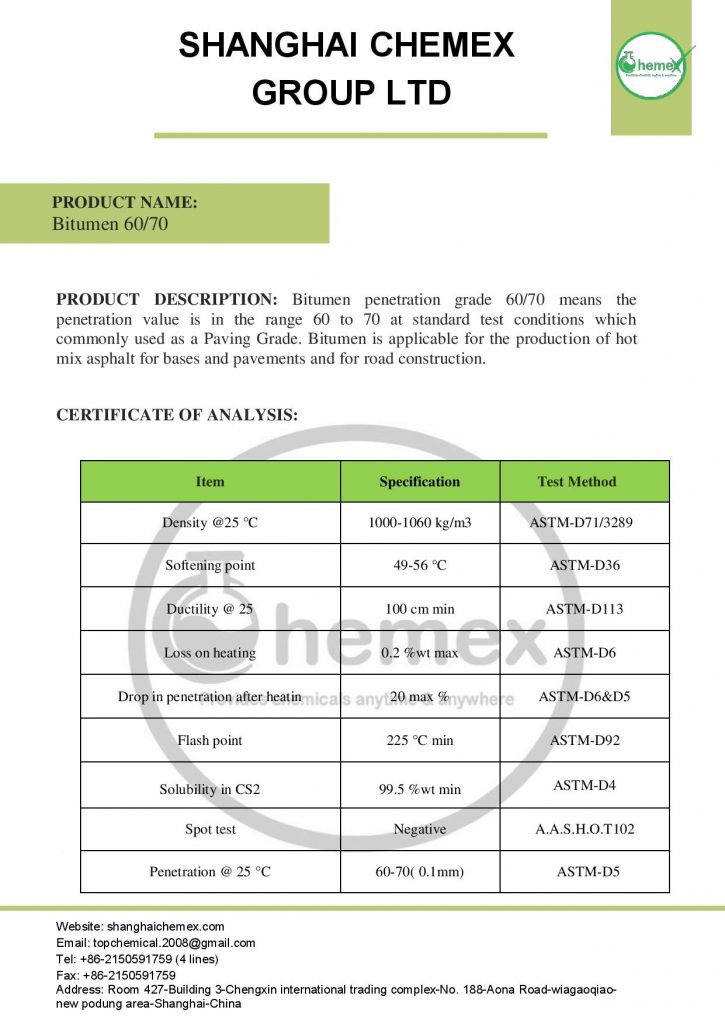 Be the first to review “Bitumen 60/70” Cancel reply